For this month’s post, I want to share my findings on the origins of the great pumpkin (maybe a Peanuts reference there) and how we came about to welcoming the pumpkin pie as an iconic food during the harvest season.

Being a dietetics major, food is always at the center of my attention. What should I have for lunch at the Spartan Café? What grocery items do I need tonight to make fish tacos? What’s a chayote? These questions and many more make the field of nutrition an interesting and growing one. For those of you new to D’Youville’s Dietetics program, look forward to the Food and Culture course in 2nd year. This is an incredible course where you will learn about different cultures, traditions, people’s eating customs…and one with a lot of taste testing involved! Even being a senior, one of my favorite areas I always love exploring is food history and how things came to be.

Pumpkins have been grown, harvested and eaten for the past five thousand years in North America, but they first surfaced in Central America and Mexico. In 1584, Jacques Cartier (a French explorer) found these “gros melons” (pumpkins) and it has since evolved its name from the English word, “pompions,” to the modern day “pumpkin.” The very first pumpkins were actually not plump and round like those we are accustomed to seeing (you know, the ones we use to carve Jack-O-Lanterns). The earliest pumpkins actually had crooked necks. Over the centuries, pumpkins were gradually cross-bred with other variations of squash to become what they are today.

The Indians introduced pumpkins and squashes to the Pilgrims, eventually becoming an important and primary food source for the pilgrims because of their long storage duration. Without pumpkins, the earliest settlers might have died from starvation. History has also noted that pumpkins were first served at the second Thanksgiving celebration, but in a very different way than how we celebrate today. The pilgrims cut the top of pumpkins, scooped the seeds out and filled the inner space with cream, honey, eggs and spices. They placed the pumpkin top back on and baked the pumpkin (in its entirety) until the inside was made into a custard like dessert.

Back in the day, Pilgrims were known not for pumpkin pie, but rather pumpkin BEER. Persimmons, hops, maple sugar and pumpkin were fermented over time to make this brew.

The makings of pumpkin pie were first documented in 1653 in a French cookbook, which was later adopted by the English to include a filling of apples, pumpkin, spiced rosemary, sweet marjoram and a handful of thyme. And it wasn’t until the early 18th century that pumpkin pie finally became a staple for Thanksgiving in New England. Later in the mid-19th century, pumpkin pie then rose to political significance in the US when Thanksgiving was then proclaimed a national holiday with the pumpkin pie being an iconic dessert. 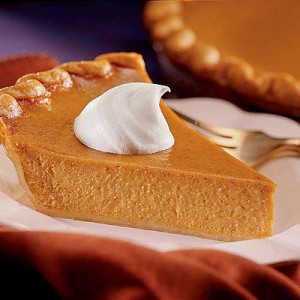 Pumpkin pies are one of my favorite fall desserts, but eating them as an alternative to other vegetables may not be the best idea. Pies do contain higher levels of saturated fats, sugars, and carbs that can take a toll on your new year’s resolutions…remember those? There are, however, tons of healthy, simple and delicious alternative pumpkin recipes out there like pureed pumpkin soups, gratins, mixed vegetarian entrées, and more!

Raw pumpkin has lots to offer – packing in loads of fiber, vitamin A, B, potassium, protein and iron! Did I mention the seeds are edible too? Be on the lookout for the dietetic student-run “Good 4 U 2 Go” program at DYC. For just $5, you can get a delicious and healthy meal that feels good to your wallet and to your stomach! They normally feature seasonal vegetables, fruits and other ingredients each month so pumpkin might just be on the featured menu! 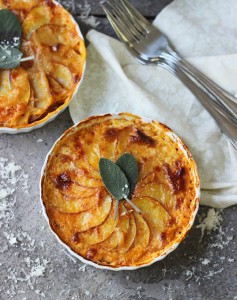 Can’t wait? Try your hand at these recipes at home!