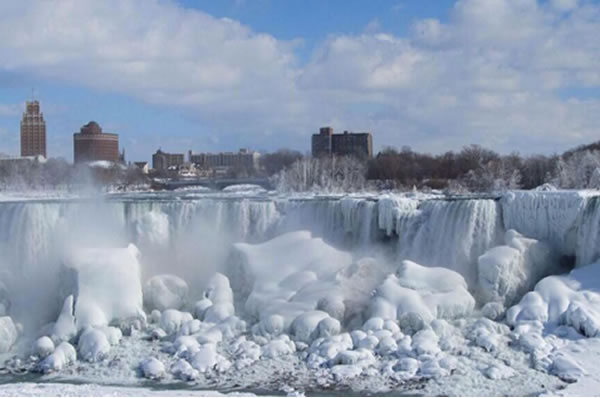 It’s nearly April and lets face it, it’s still freezing out. The brief stroll from the library to DAC leaves you shivering from head to toe. You touch the door with your hands and the metal is so cold your hands sting in disapproval. The door gusts open and you walk back to quickly attempt to shut it behind you. While some of us used our spring break to travel to some warm destination to try and forget about the cold back at campus, and others wrapped themselves in a blanket and thought about the warm summer days ahead, there are still some pretty cool things to see in Western New York right now that will not be there in a few weeks. So step out of your blanket cocoon, put on your mittens, and check these out! 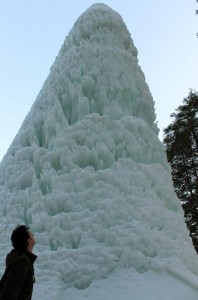 Over 50 feet of frozen ice created by a geyser in a pond near the Glen Iris Inn.

While I had already traveled to the Grand Canyon of the East in the fall to admire the leaves, curiosity got the best of me when I heard of the Ice Volcano at Letchworth State Park, a huge cone of ice that formed as a result of gushing water from an outdoor fountain near the Glen Iris Inn. Take a nice drive in the scenic winter wonderland of the Western New York countryside and see the volcano for yourself. Letchworth State Park is a little over an hour from campus. While I recommend checking it out during the day, if you have a later class and want to check it out, the Castile entrance of the Park is open until 11pm to visitors.

Freezing Temperatures have made the view of the mighty falls appear to be frozen as seen in this video. While I checked with the Niagara Visitors Center to see how much of the falls is still frozen, they informed me that the falls haven’t froze since 1840, yet an “ice bridge” has formed on much of the American falls. As of today, the ice bridge was starting to break up but it was still in place in some parts. Walk around the state park and check out the rapids and the ice covered falls for yourself. The observation tower is open until 4:30pm this time of year and is free to visitors. 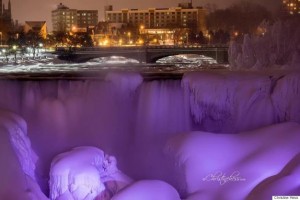 Even if you don’t have a chance to get there during the day, the falls looks pretty cool this time of year at night, illuminated by the rainbow lights. You can see the falls at any time of day, but the state park is lit until 11pm for visitors.

If you have a little more time for a day trip, drive through the Finger Lakes of Central NY starting about an hour and a half from school. Bundle up and take in the beautiful expanse of the frozen lakes and the snow covered cottages dotting the landscape. Look closely and you will likely see someone ice fishing or snowshoeing out on frozen lakes. 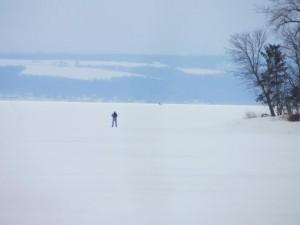 Someone ice fishing on the great lakes.

Continue your drive south to Ithaca, a vibrant town south of Cayuga Lake known for its gorges and waterfalls. 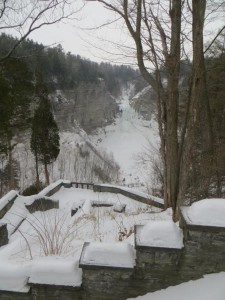 The view from the parking and viewing area at Taughannok Falls.

Ithaca Falls, Taughannock Falls, Businessman’s Lunch Falls, and Buttermilk Falls are all accessible during the winter. The highest of the falls is the scenic Taughannock Falls, which plummets 215 feet and is one of the highest falls east of the Rocky Mountains. I had the opportunity to check this one out for myself a few weeks back and most of the falls were solid ice with a small crevice of trickling water. While the trails leading down right next to the falls are closed in the winter, you can walk and drive around the park, and even go sledding , ice skating, snow shoeing or cross country skiing. Best of all entrance to the park and parking is free!

Do you have any more interesting winter attractions? Let us know in the comment section below!