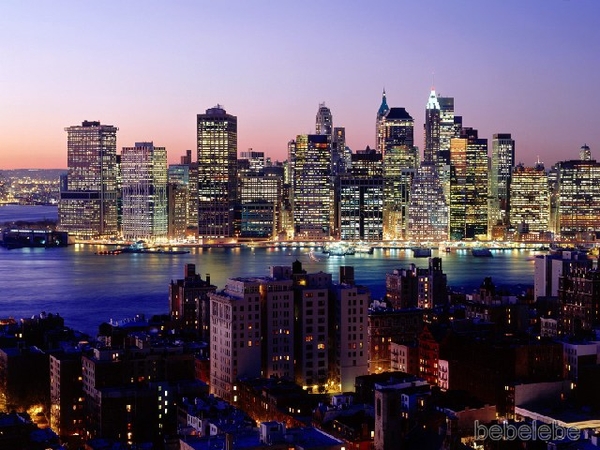 After months of deadlines, tests and everything in between, spring break is finally near. Ain’t that sweet? Now unless you have pages of thesis to edit (ugh, my fatal reality), why not go on a mini vacation? I know, I know- we’re all still on that student “budget.” I’m not talking about a trip to Portugal or Japan (although that would be pretty awesome). Let’s work within our student budget and still have fun here. It seems better than the next alternative, chilling on the couch, watching Netflix reruns, well to me anyway. 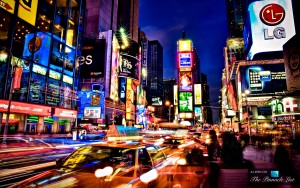 1. New York City (furthest)
I don’t know about you, but I’ll finally be checking out NYC this spring break!! If you have a friend or extended family member that lives in/near the city, why not spend a few days exploring the culture that is NYC?

Take the bus and get there for under $100 and let the city lights guide you from there. Grab breakfast by a street vendor and hang out beside the Tiffany’s jewelry store (I could re-watch that movie for days). Check out the Empire State Building that most songs rave about. Snap selfies or snapchats at the picturesque Grand Central Station. Go for a jog in Central Park like they do in the movies. Check out the train track park, Highline, that’s in Chelsea. Engulf the culture that is NYC.

P.S. If you’re a foodie, there are places like St. Mark’s Place, Japadogs, Ninja Café & Shake Shack that I’ve heard good things about.

2. Toronto (closer)
For roughly $30, you can get a round trip ticket to Toronto (buy tickets early though!). There is always the option of checking out motels close to the suburbs (think North York, Scarborough, Mississauga) as they will probably be cheaper. If not, there is also airbnb that lets you rent out inexpensive rooms (or the entire apt/home) of others. 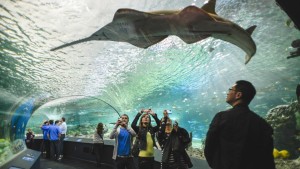 Once you’ve finalized sleeping arrangements, the city is your oyster. Check out the Chill Ice Bar and experience the ways of the eskimo. See a Second City Improv comedy show (they had me laughing in tears once). Become Sherlock Homes in an Esc It or Decode murder mystery. Admire the waves and swans at Lakeshore. Play board games at Snakes & Lattes with a latte in hand (as lame as this sounds, I think it’s really fun!). Swim (theoretically speaking) with the sting rays at the Ripley’s Aquariums. Experience the city life of Canadians and decode the hype of it all. 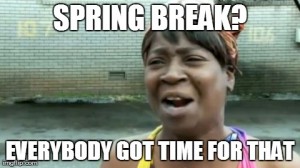 Everybody has time for spring break!

If you still have exams to study for… Why not take a short break at the least? Swing by Niagara Falls, Ontario (yes, that is in Canada) even if just for a night. A break, however short, is still sweet. Play the slots at Fallsview Casino. Walk along the falls. See the big lights along Clifton Hill; buy all things chocolate at the Fudge Factory or the Hershey store. Excite your eyes at Ripley’s Believe it or Not or the Wax Museums. I personally love the Coca Cola shop they have there (coke floats btw). There is something for everyone in Niagara. The food on the Canadian side is quite exotic as well!
You can do a little exploring in the backyard of Buffalo if you really wanted to. Try cooking that recipe you’ve been telling yourself to try since…forever. Try that new restaurant that has been on your to do list. This is a full 7 days of doing what you want to do. Ultimately, what I’m trying to say is enjoy your time off. You’ve earned it!

Do you have any spring break destination recommendations? Let us know in the comments section below!