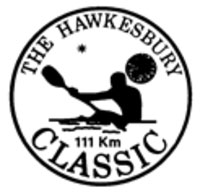 The Hawkesbury Canoe Classic (HCC) 2014 was a volunteer opportunity that has enriched my Exercise and Sports Studies internship experience in Australia.
The HCC is a long distance 111km river race. It started inland from Sydney where there are a lot of farms and rolling hills along the river.

The one routine is called a thoracic clearance which mobilizes the part of the back where the ribs connect to the spine.  This routine addressed the tension and stiffness that the paddlers would experience over the course of the race.  Through the different manual techniques, their breathing would be assisted, mobilizing and freeing up the ribs and sternum allowing them to move properly.  And their back would be addressed by muscular release techniques and soft tissue work. 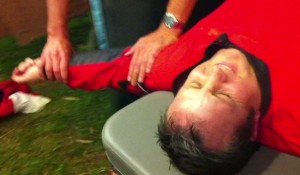 The other routine, the pelvic clearance, aims to align the pelvic girdle.  This routine includes stretches that would stretch the gluteal muscles and hip flexors providing much needed relief for the paddlers remaining in a seated position for long periods of time. 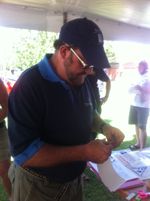 We were split into teams of physiotherapists and student assistants. I was placed with Andrew and Rosemary, both physiotherapists and Dominic and Ben, both students of physical therapy in Sydney.  As a team we went to every check point assisting the physiotherapists with patients. There were only a handful of patients who came in at the first stop, so we went down to the beach where paddlers would come into their land crews to remind them to stretch and provide assistance if they asked us for it.  The second spot was busier than the first and I was able to assist with more patients.

The third check point was only there in case of an emergency, and few people stopped to see their land crews. The one man had to stop because a fish jumped into his boat and caused him to flip over and lose all of the water he had been carrying with him.  He said he had stopped by a house boat on the way and asked for water. The others who came in, changed out of wet clothing and stretched their legs. 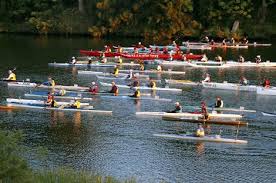 The weather was variable, there were dark clouds that rolled in, leaving behind the strongest double rainbow I have ever seen. There was hail and white out fog in the morning as well.

Finally my team made it to the finish checkpoint, and the team was grateful for more assistance. I assisted in the treatment of several more patients and helped pack away treatment materials.

What This Experience Taught Me

This experience has taught me that I am capable of working with patients and I want to know more in order to be able to address all of the patient’s problems.  It has opened my mind to a clinical and critical way of thinking. I am excited to start the physical therapy program at D’Youville now more than ever.