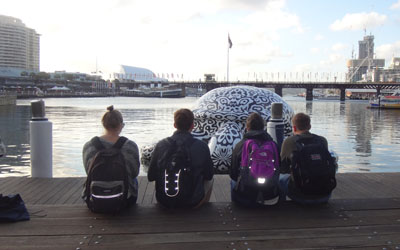 After finally getting to Sydney, Australia, I’ve realized that all of the preparations for study abroad and the hours of working were worth it.  Chicago was experiencing some

trouble the day I was supposed to fly out, so my flight was delayed a day.  When I arrived, I walked into the CAPA family.  The student group gets along well, and the support staff is very attentive to our interests and goals while we are here. This includes both our academic goals as well as what we’d like to see and do while we’re here.

The first two and a half weeks have been a whirlwind of adventures and discoveries.  The first week started out with orientations relaying information about CAPA and introducing us to the staff and faculty.  We went on a scavenger hunt around Sydney to familiarize ourselves with such areas as the Darling Harbour, the Central Business District, China Town, North Sydney, and the Rocks where we ended the evening eating Kangaroo and Crocodile pizza at the Australian Hotel. 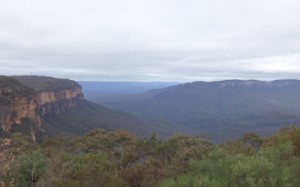 I went to the Blue Mountains situated west of Sydney.  As a group we hopped on a tour bus and it took us through the winding roads.  Leura, a quaint and charming town, served as our pit stop along the way.  Here I tried my first meat pie.  Before you judge, I know it sounds a bit sketchy, but they are wonderful, especially from a small bakery like that one.  I definitely recommend to anyone traveling in Australia to try it. Then we hiked the trails in the rainforests in the mountains. It was nice to get away from the noise of the city and be surrounded by trees.  We experimented with okre that the Aboriganes used to make paint and spotted the Three Sisters mountains along the way.

That Monday I started my internship at Hornsby Physiotherapy with Nick Stepkovitch. I have already learned so much about how Physical Therapy operates in Australia, as well as some techniques and his particular theory.  I am working with a blend of local and international students and it is a great work environment; we all want to help each other grow from this experience professionally.

The Wild Life Park was our next excursion as a CAPA group.  It was the best zoo-like experience that I have ever had.  Kangaroos, wallabies, and emus were

walking around freely and we could pet them (and I got the much needed selfie with a kangaroo).  They had other animals as well.  We also took a guided walk in the bush, ate termites (they taste like Eucalyptus oil) , made rope out of tree bark, and failed miserably at throwing a boomerang.

And finally, I went to Bondi Beach for the Festival of the winds.  The weather was great and it was the perfect way to spend a Sunday: sunning and playing beach volleyball.  My friends and I had to try the fish and chips, which is a must do, and it was fantastic.  The ocean is amazing and I would gladly spend my free time at the Oceanside.

This has been an action packed first couple of weeks and I cannot wait for more adventures to come.  This has been such a whirlwind so far and I am trying my best to make the most of every moment I have here in this beautiful place.