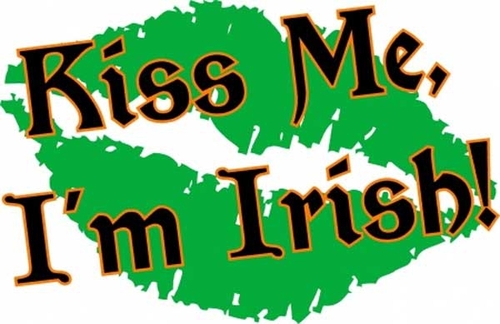 Green knee highs, “Kiss me I’m Irish!”, light up shamrock medallions, and vibrant Kelly green lipstick- Yep I was ready for the big Irish Saint Patrick’s Day celebration! This past weekend I had the pleasure of attending the 71st consecutive Buffalo St. Patrick’s Day Parade. The parade originated in 1811 and is the 6th oldest St. Patrick’s Day parade in the nation. Not to mention, it is the third largest parade in New York State on St. Patty’s Day. The parade takes place on Delaware Avenue from Niagara Square all the way to North Street. Luckily for D’Youville students, the parade is only a short 15 minute walk away from campus. No need to worry about finding a parking spot or having money to take a taxi (for those who are the party animal type.) Just walk it out!

Around 1 p.m. on St. Patty’s Day my friends and I headed to Allen Street to enjoy the parade. Allen Street is probably the most crowded section of the parade because it is where all the college students congregate. I do not think I saw one person over the age of 26 in the entire area. The street was like a sardine can full of college students. With everyone weed-whacking through the crowds, it was nearly impossible to stay with one’s group. Eventually, I lost track of my friends when I was taking some pictures of the parade for this post.

Below are a few pictures from the parade: 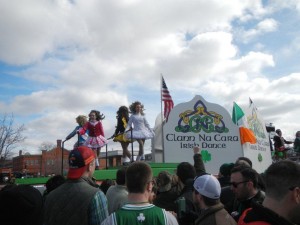 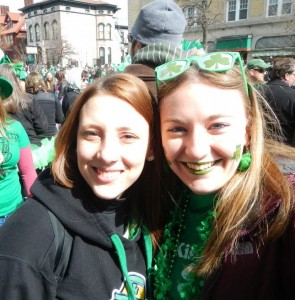 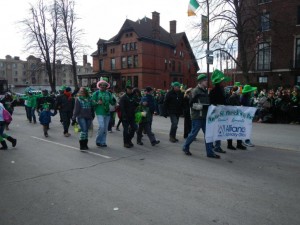 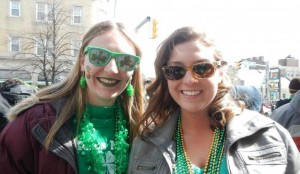 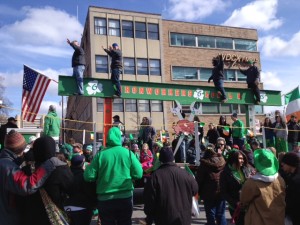 The iron workers know how to make a great float! 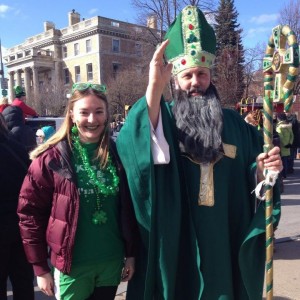 St. Patrick and I

After being lost for quite some time without cell phone reception and having no luck finding any of my friends, I decided to head back to D’Youville. It was a peaceful walk, and just as I arrived at the dorms I ran into a couple friends who were about to take a taxi to the parade (they were freshmen and did not realize how close the parade was.) They invited me to head back to the parade with them so I did. We started on North Street (the Parade’s end) and worked our way down to Allen Street again. Along the way we ran into quite a few characters. There were men dressed in full-body spandex green suits, guys were offering free hugs to anyone passing by, and we even ran into St. Patrick! This time when cutting through the crowds we grabbed onto one another so we could not get separated. We all stuck together and had a wonderful time. The people watching was fantastic! I would have taken more pictures, but my camera ran out of memory. Overall the parade shined with energy and provided hundreds of poor college students free loads of fun! 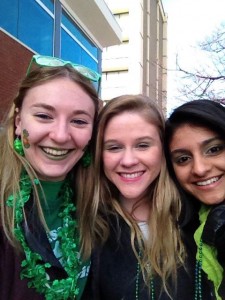 My only complaint for the day was that I did not get to have any corned beef! Every year since I can remember I have had corned beef on St. Patrick’s Day. My grandmother always has everyone over to her house and we eat all six or seven of the corned beefs she prepares for us. Unfortunately I was unable to go home to Cleveland for the holiday this year and I missed out on grandma’s corned beef. For me St. Patrick’s Day just feels wrong without having corned beef with my family. St. Patrick’s Day is kind of a big deal at my house. When I was younger I even believed in leprechauns and I always tried to hunt them for their pot of gold every year. It did not help that my pre-school teachers encouraged it by taking my class on a leprechaun hunt and then painting green leprechaun footprints all over the classroom.  My older cousins liked setting off my traps and leaving money under them too. As sad as it is to say, I think I was about ten before I realized leprechauns do not exist and that my teachers as well as my older cousins had tricked me. It was a fun game while it lasted. Despite not having corned beef or chasing after imaginary leprechauns I made the best of the holiday in Buffalo with my friends.

Stay tuned for a post update this weekend to see a picture of my awkward childhood leprechaun hunting outfit if I find it when I go home for spring break! Awww yeah!!!!!!!!! Relaxation here I come!