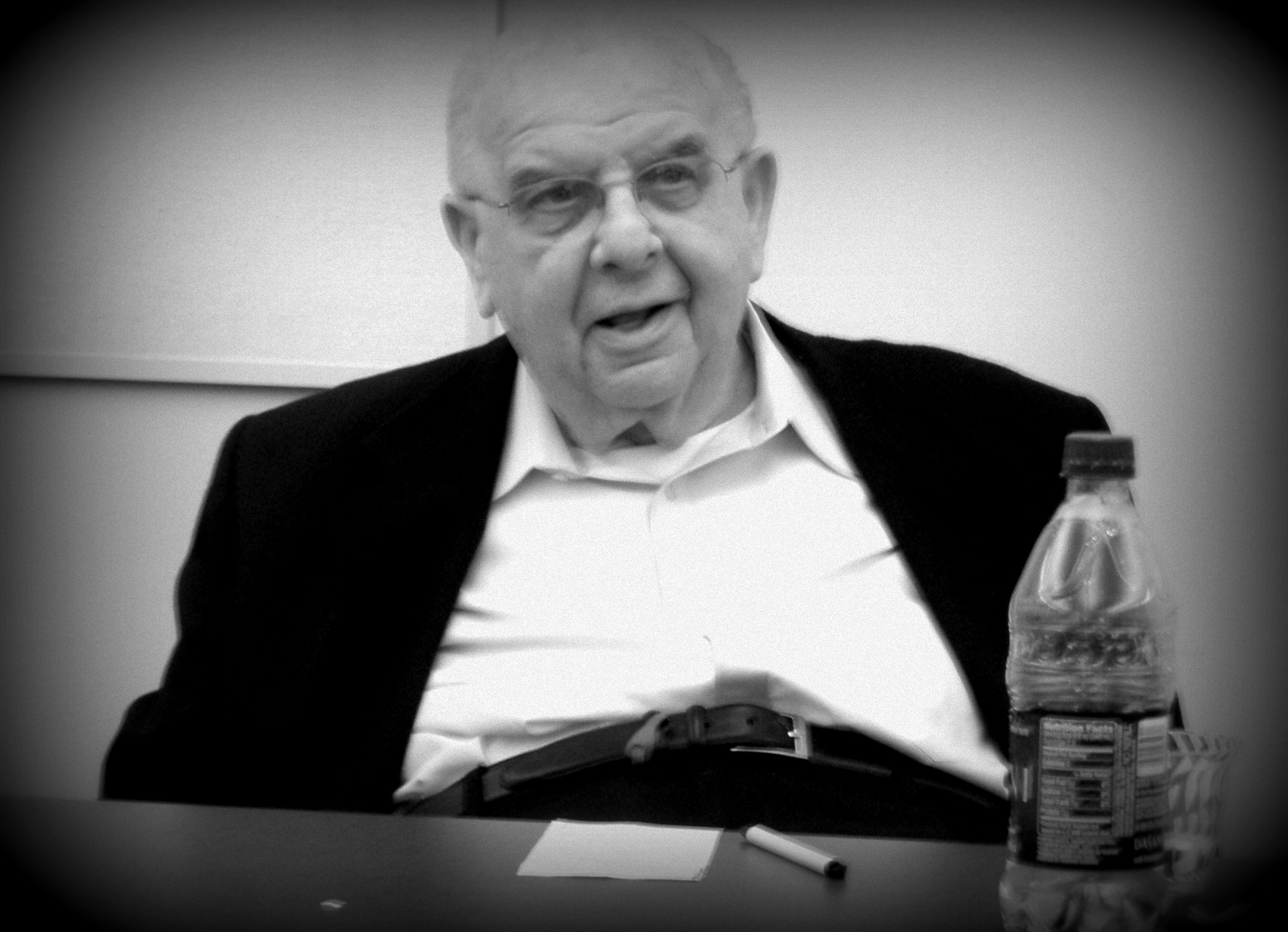 On November 16, 2011, I had an experience that I will never forget. A man came and spoke to my Religion and Social Responsibility (RS 201) class at D’Youville College. He was not an ordinary speaker – Joe Diamond was a survivor of the Holocaust. He was fortunate enough to survive the infamous Auschwitz Nazi concentration camp to tell his heartrending story.

Sylvia Schwartz, the executive director of the Holocaust Resource Center of Buffalo, began by inviting us into Joe’s life and encouraging us to share his testimony with friends and family. After listening to his testimony as a survivor of the holocaust, I decided I needed to do more. That is why I want to share his story.

Joe Diamond was born in a small and exceptionally religious village in the former Czechoslovakia, where people got along harmoniously. Rumors started circulating that World War II would begin, and Joe had clear memories of hearing Hitler yelling over the radio. Most people thought of Hitler as crazy, but some people took him seriously. It was in 1939 when the Germans came and occupied the village. The Jews were forced to wear yellow stars on their arms, and from then on racism became legal. Violence was prevalent and one could be beaten up at any time while the police turned the other way.

In 1944, a small glimmer of hope came to the village when the Germans started to move back home to Germany. The war seemed to be ending, but the Germans did not forget about Jews. They came up with “The Final Solution”: it was more important to the Nazis to wipe out all of the Jews than to win the war.

One day a notice was posted in the paper and there was a rally in the center of the village. A man stood up and told the village that all Jewish people had to be packed in twenty-four hours to leave their home. The Jews were told in a civilized manner that they were being sent off to help the Germans. All to soon they found out that this was not the case. The next morning Joe, who was fifteen at the time, and his parents with his seven-year-old brother packed their belongings to leave their village. They were only allowed to take thirty-five pounds of belongings with them. Joe’s family and the rest of the Jews from the village were herded together by soldiers carrying bayonets and were told that they were now prisoners of the German army.

As the soldiers marched the six hundred people out of the village and to the school two and a half miles away, Joe recalls seeing the faces of his calm neighbors as they left. After spending twenty-four hours at a local school for processing, they were shipped off to a brick factory where they would spend the next four weeks waiting for their “final destination” to become less busy. Although they had barely enough food to eat, the time they spent at the brick factory was not pleasant as they had no roof and no sanitary facilities. Sure enough, at the end of the four weeks they got word that their destination was on schedule. After being given numbers, they were brought to a railroad station where they were forced into cattle boxcars. The soldiers made the prisoners keep their hands above their heads to fill the boxcars to the max. The train stopped briefly in Krakow, Poland to throw out the bodies of dead expectant mothers and children that had died during the journey.

Auschwitz
After another two hours, the train finally arrived at their destination. They had no idea where they were at until the car doors opened. There stood the ominous sign: “Welcome to Auschwitz.” Directly next to the welcome sign read, “Work will make you free,” in German.

Joe then recalled a gruesome story of the welcome they received upon arrival to Auschwitz. There was a hold up on the train because a mother just gave birth to her baby; so the German soldier came over to see what was with all the commotion. When he saw what had just happened, the soldier took the woman’s newborn baby and kicked the child out into the field to die. Stunned at what just happened, Joe’s family was then forced into a seven and half hour line for processing.

Once they reached the front of the line, the German officers split Joe’s family up. His mother and young brother were supposedly being sent to a residential camp while he and his father were sent to the labor camps. Joe was told they could visit his mom and brother on the weekend but that ended up not being the case. That day was the last time he saw his mother and brother. He found out later that they were murdered that day by suffocation in the gas chambers.

Joe and his father were sent off to a labor camp where they were given prisoner clothes with their number sewn on. Some were told they would receive tattoos. After they were disinfected and received cold showers, they were sent off to the stable-like barracks where they would be sleeping five to a bunk. The SS guard in charge of the barracks was a former prisoner who had killed three of his wives. He told them that if they did not listen or do their jobs correctly, they would be sent to the gas chamber.

The next few weeks at the Nazi concentration camp, Joe spent his time hauling brick, mortar, and blocks three miles to build more gas chambers. The prisoners were given minimal food and soon people around him started to die from starvation. Originally there were around 3,500 of them at the camp but the number dwindled down to 3,000. One day a selection committee decided that there was too many prisoners, so 800 men were sent to the gas chambers while the remainder went to “bricklaying school.” The next week 1,200 more were killed.

In the end, only 320 men of the original 3,500 remained and Joe Diamond was one of them. Joe told our class that ever since that day he has felt guilty and wondered why so many of his friends and fellow Jews were murdered while he was spared.

Russians Approaching
The German soldiers caught wind that the Russians were getting close, so they took the prisoners on a death march to Austria. Joe recollected the cruelty of the soldiers and how they used the prisoners for target practice, as if they were animals.

Eventually the war was declared to be over so Joe left the area searching for food. One day he came upon a truck and was finally liberated by the American Third Army. The American soldiers were awestruck at the sight of his starved body and brought him to German hospital to be cared for. He fled the hospital for fear of the Germans and found a Russian soldier who brought him back to his village. The village he once knew was unrecognizable. The once paved roads were now dirt and the buildings were falling apart. Everyone was suffering.

No longer having ties to his childhood village, Joe left for Northern Ireland where he learned to speak English. After discovering that he had an uncle in Buffalo, Joe came to America in 1948 with only five dollars in his pocket and the will to live.

After becoming a citizen of the United States, Joe Diamond was drafted into the U.S. Army during the Korean War. After being stationed in Germany, he wanted revenge. But once he saw life in Germany returning to normal with the children playing in the streets and the old men walking in the parks, he knew that he was not a murderer. The only way he could ever get even with the Germans was if he told his story. He thought it was important for us to know that even if he was a prisoner of war, he does not hate every German. It is important to never generalize people.

Joe left the class by telling us, “Don’t ever be a bystander; if you see your neighbor in trouble, help them if possible.” People always say “never again” will the Holocaust happen. But if we just sit back and do not help our neighbors, we are no better than the Nazi soldiers. Also, get as much education as possible. This is the best way to prevent a tragedy like the Holocaust from happening again.

Six million Jews and five million people of mixed backgrounds were murdered during the Holocaust. There are those who claim that the Holocaust never happened. And I ask those people, how could the killing of eleven million innocent people be fabricated?

I hope the story of this man’s life has touched you. If you want more information on Joe Diamond, a chairman of the special bureau, or the Holocaust Resource Center of Buffalo, be sure to check out their website. 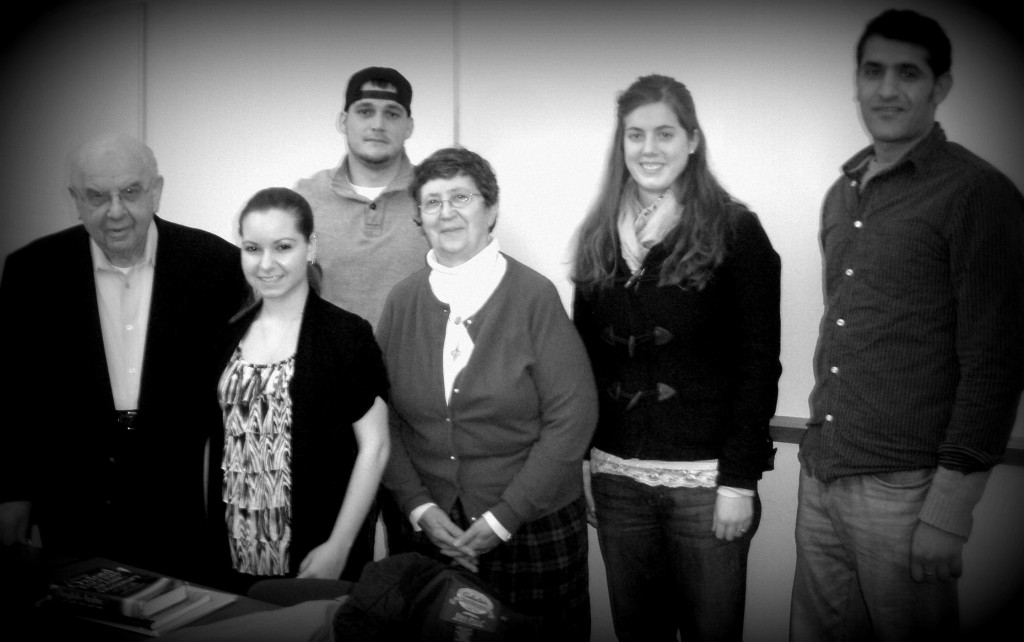