What’s in a Name? Everything You Always Wanted to Know About University (But Were Afraid to Ask) 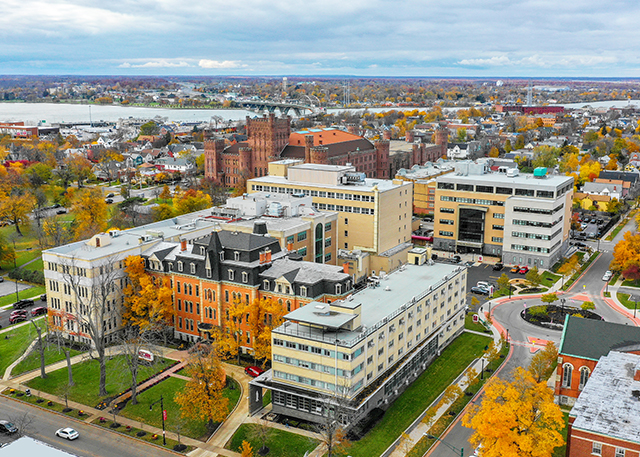 People are inquiring, “Is D’Youville a university now?” The answer is simple! Leading educational organizations and publications categorize D’Youville as a university, and for good reasons.

The main difference between a college and university is not, as many believe, size. University classification is based on the number of indicators. A primary indicator includes doctoral degree offerings and conferrals.

Recognizing our robust offerings, the prestigious Carnegie Commission on Higher Education added D’Youville to its ranks of Doctoral/Professional Universities in 2018. The Carnegie Classification® has been the leading framework for recognizing and describing institutional diversity in U.S. higher education for nearly 50 years. Starting in 1970, the Carnegie Commission on Higher Education developed a classification of colleges and universities to support its program of research and policy analysis.

Based on these scores, U.S. News & World Report not only recognized D’Youville in its 2020 and 2021 Best Colleges Rankings, but also since last year in its 2020 rankings moved us from the “Regional Colleges – North” category to the “National Universities” category. With this latest report, D’Youville was recognized as the second-highest nationally ranked university in Western New York and the highest private institution.

In New York State, Education Law §224(1) prohibits an entity from doing business under the name “university” unless the Board of Regents has given it permission to do so. The Board approved a definition of “university” in the Commissioner’s Regulations in 1968:

University means a higher education institution offering a range of registered undergraduate and graduate curricula in the liberal arts and sciences, degrees in two or more professional fields, and doctoral programs in at least three academic fields (§50.1 (I)].

The New York Board of Regents, which oversees NYSED, only governs whether an institution can call itself a “university” in its official name.

On April 30, 2008, Johanna Duncan Poitier from the State Education Department in her presentation to Regents Higher Education Committee stated:

“The only issue is using the word “university” in an institution’s name, not an institution’s use of that word to describe itself, which is not prohibited. For example, it would be acceptable now for an institution to describe itself as follows: ‘The New School – a global university in Greenwich Village offering numerous degrees and continuing education opportunities in design, social sciences, management, humanities, and the performing arts.’ It would not be acceptable for the same institution to call itself ’The New School University‘ unless it met the regulatory requirements of a university.”

New York State is the only state that has any requirement for doctoral programs in order to use the term “university” in the title of an institution. Although D’Youville does have more than three doctoral programs, the state, at this time, only recognizes PhD programs. The State Education Department is currently revisiting this criterion. D’Youville filed an application for a name change more than two years ago and that request is still pending.

Office of Marketing and Communications